05 Jul When Does Pointing Out Gender Help Women?

Posted at 08:55h in Elevate Talent by Jacqueline Frost

When Does Pointing Out Gender Help Women? 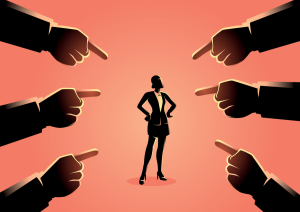 On 10 April 2021, Rachael Blackmore galloped to victory in the Grand National. An amazing accomplishment for any human being.

However, what also made the news was that she was the first woman to become a Grand National champion. In a sport that, for reasons that make no sense to me, has been dominated by men, this was perhaps an equally incredible accomplishment.

But should her gender really add to or detract from what she did? In a post-race interview, Rachael was quoted as saying, “I don’t feel male or female right now. I don’t even feel human.”

This poses a tricky question for us because, clearly, we should be celebrating that she is the first woman to win the Grand National, but we also have to strike that balance of putting the word “woman” in the narrative of some stories.

So, where is the line drawn? At what point does pointing out gender go from empowering and celebratory to patronising and condescending?

This article will explore these questions in some detail and provide some insights on what we all need to do to celebrate gender diversity in the right way.

Back in 2018, a heroic pilot safely landed an American Airways plane after one of its engines exploded and blew a hole in the cabin. This was an incredible feat of bravery and professionalism from an ex-US Navy fighter jet pilot. Yet when the initial reports came out, most of the attention was focused on Tammie Jo Shults gender.

The report was full of “female” labels instead of what was important: her accomplishment. It shouldn’t have mattered what sex or gender the pilot was in any way!

Let’s look at a very similar story with another heroic pilot, Chesley Burnett “Sully” Sullenberger. In 2009, Sully safely landed a passenger jet on the Hudson River, saving all 155 passengers. However, when Sully performed his “Miracle on the Hudson”, the story wasn’t about a “male pilot”.

The thing is, there are many male and female pilots out there just doing their job. It shouldn’t matter if the pilots are men or women because their gender isn’t relevant to the narrative.

The narrative of female firsts

Now, historically, women have not had the same opportunities that men have had over the years, and their accolades and accomplishments need to be celebrated – but their gender should only be mentioned when it’s important to the story. A good example of this is female firsts.

Valentina Tereshkova was the first female astronaut in space, and we need to make a big deal about that! However, Tammy wasn’t the first female pilot, and her gender isn’t relevant to her story and what she achieved.

There are so many areas of society where gender is irrelevant, but for some reason, we still tend to make it part of some women’s stories.

The truth is that when we constantly make gender part of the story, we start to take away from what’s important – the unique skills and special talents of the individual. A CEO isn’t a male or a female, it’s a highly talented individual with all sorts of qualities. Labelling a CEO who is a woman as a “female CEO” somehow distorts their achievements.

So, where do we draw this line between celebrating women’s successes and just celebrating the accomplishments of human beings?

The problem here is that we’re late to the party in educating ourselves about the phenomenal achievements of female firsts. Most of the time, that’s because men have historically had the opportunities and have done things first, so theirs are the stories that get told.

However, we need to look back over history and learn to celebrate these female firsts in the same way schools are pushing for more education around important elements like black history.

We need variety in the world, and diversity brings variety to the table. To make diversity a norm, we’ve got to start earlier in celebrating the accomplishments of all human beings of all different backgrounds. And that means educating ourselves about all the great women out there who broke through the ceiling.

Focusing on the right places

However, as I have already explained, we need to be careful where we point the spotlight. Often, the media like to focus on the “female pilot” or the “female CEO” as though it is a surprise when we hear about one. They’re still clinging on to an old perception of what women should be, which needs reassessing.

There’s no need to point out female pilots, but the first woman winning the Grand National? The first woman astronaut? The first woman to climb Mt Everest? Yes, absolutely! Those are all achievements to be celebrated because they are showing that there are lots of voices out there, and lots of people have different things to say, ideas to share and stories to tell.

In situations like these, when they are the first women, it means they have broken through a barrier, which is incredibly inspiring and contributes to the progression of diversity in the world.

To keep you inspired and maybe educate you a little on this topic, let me finish this blog with a bit more information on some of my favourite female firsts:

In 1975, Junko Tabei reached the summit of Mt Everest. In 1992, she also became the first woman to complete the Seven Summits challenge (climbing the tallest peaks on every continent).

Junko is credited with one of my favourite quotes, “Do not give up, keep on your quest.”

Chloe Zhao: the first woman of colour to win the BAFTA for Best Director

Only a few weeks ago, Chloe became the second woman and first woman of colour (Chinese descent) to win a prestigious BAFTA Award for directing the film Nomadland.

Chloe is a great example of how important diversity and variety are in the world, and I cannot wait to watch her award-winning movie!

Whilst most of us have heard of Amelia Earhart, what about Bessie Coleman? Probably not. She was the first black woman to earn her pilot’s licence. As she was refused by flying schools in the U.S. she moved to France to do so.. This gave her another first – the first black person to earn an international pilot’s licence. She became a media sensation upon her return to the U.S. .

I look forward to sharing more next week.

For more information on how to build a strong pipeline of leadership ready female talent, please get in touch by emailing us at [email protected].

Alternatively, you can learn more about Elevate programme and the webinars we run by emailing us at [email protected].