Posted at 10:39h in Uncategorized by Jacqueline Frost

Why Adding This Element To Help Build Trust Works Wonders 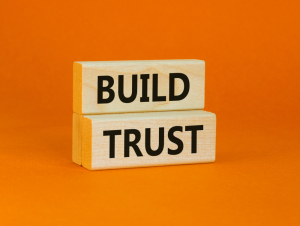 When it comes to building and maintaining trust in the workplace there’s one, often overlooked, element that can work wonders for your career when you know how to get it right.

Thought leaders regularly share good advice on the different boxes that leaders need to tick to gain trust. Author Stephen M. R. Covey suggests that the key components are character and competence. In Think Like A Monk, author Jay Shetty expands on this belief to include care and consistency.

However, at Elevate Talent we’ve noticed that both formulas lack one element that is crucial to the rise of the mid-level female exec. In this blog we’re going to show you how to plug that gap so that you can win trust and climb the career wall.

But first, let’s explore a real-life situation that demonstrates the value of the missing part.

One of my senior coaching clients (for the purpose of this blog we’ll use the fictitious name Gail) had been passed over for promotion. When Gail heard that her boss was moving up to the next level she was excited: she was certain she’d be his successor.

Instead, Gail was shocked to be told that her organisation was employing an external candidate to take over the position. When she discussed with her boss why she hadn’t been considered for the role she was told: “We were really keen, but it seemed like you were already struggling to keep up with the demands of the current role.”

On further analysis, Gail realised that she’d fallen into three traps commonly experienced by people at her level of seniority:

Gail had learnt a harsh lesson. Once she transformed how she worked she told me: “I’m working regular hours and rarely work late. I’m nowhere near as stressed because I’m not trying to do everything any more.”

It was clear from more in-depth conversations that Gail’s boss rated her competency and her character, so what was the element that she was missing?

The trust-building element that works wonders

At Elevate Talent we believe that the vital element mid-level executive women need to bring into play is capacity.

If you’re committed to progressing your career we encourage you to consider the following “4 Cs of Trust”:

-1- Credibility: How credible are you in your role or the role that you would like to step into? Do people believe what you say? Do they see you as a person of integrity? Are your actions and your words congruent?

-2- Competence: What are your talents, skills and capabilities? What do people see that you are capable of?

-3- Character: Who are you as a person? Are you perceived as mature? Are you considered to be a person with good principles?

-4- Capacity: Do you have the capacity required to deliver on your job or the role that you desire? Or, are you seen as a busy person with little-to-no scope for taking on greater responsibilities?

Our coaching clients often tell us they’re stunned when they aren’t considered for promotion because they believe they perform well in their current roles and are obviously “busy” with their work. However, senior management is not interested in people simply being busy, they want to see results. What results are you delivering?

Effectively demonstrating your capacity is the missing part that will help you unlock your path to promotion. If you lack the first three elements (credibility, competence and character) then capacity becomes irrelevant because you won’t even be in the running for promotion; but if you have the first three you’ll likely need the fourth to be a strong or successful candidate.

In one of Elevate Talent’s recent surveys 50 per cent of our 800 delegates (who took part) told us that they now recognised the need to demonstrate their capacity.

Which of the “4 Cs of Trust” do you think is your strongest asset? Which is your weakest? What do you need to do to rebalance and further your prospects?

Some of our delegates told us they were going to start focusing on what really matters (prioritising) and stop trying to do everything (capacity). What will you do to build trust so that you can climb the career wall and create the personal and professional life you desire?

If you’d like support to make that happen, get in touch with Elevate Talent. You might also like to refer to our earlier blog This Equation Will Help You Build Trust And Progress Your Career.